Rarely do you meet a vine grower and winemaker who lives and breaths his wine philosophy as Bertrand Gautheron does. When you visit him you will very quickly realize that biodynamics is not a marketing concept here. He will take you up to his Vouette and Sorbée vineyards (lending their names to the domaine) adjacent to the winery and begin a fascinating lecture on soils, viticulture and biodynamics. And think that back in 1993 this man that now so strongly lives in symbiose with his land, was a product designer for Guerlain in Paris!

He took over his small family vineyard in the Côte des Bar selling grapes to the local cooperative and the négoce. He was soon encouraged by Anselme Selosse to start his own production, which he did in 2001. The Champagne world welcomed his unique produce with great enthusiasm and quick cult following, and today his domaine has grown from its initial 46-are Vouette vineyard to 5,5 hectares, all situated less than a one-kilometre radius from the winery. In 2013 he changed the company status from récoltant-manipulant to négociant, as he joined forces with his brother, who sells the grapes to him from a further 1,3 hectares.

Horses are used in the vineyards, where all the efforts accumulate as healthy, well-aerated soil full of life. Bertrand has possessed Demeter certification for biodynamic viticulture since 1998. If he is very much hand-on in the vineyards, the approach is hand-off in the winery where the operations function by gravity. The wines are largely fermented in oak with natural yeasts. The wines are not filtered and cold-stabilising takes place by moving the barrels out in the winter for their temperature treatment. Sulphur dioxide is scarcely used and for that reason they should be consumed sooner rather than later (date of disgorgement is shown on the bottles). Bertrand is not an advocate for long lees ageing whereas he likes to bottle the wines when they are already ‘adults’. There are no sugar additions at disgorgement, hence the wines are all brut nature. A vinous, textured yet saline style. Hard to define as each bottling comes with a personality of its own and post-disgorgement time plays its hard-to-predict tricks. At best these are wine full of individual character and soul, highly terroir expressive and profound. 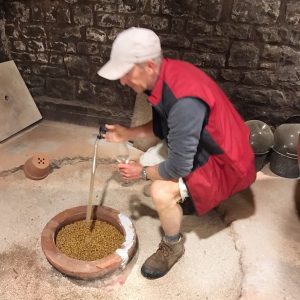 Fidèle is a 100% Pinot Noir from the estates vineyards on Kimmeridgian soils of various aspects. The 2016 base was fully made with fruit from that year without adding reserve wine. When freshly disgorged this cuvée charmed with its delicious and cool yet expressive red fruit. There is a touch of spicy exuberance surfacing over time in the glass. Beautifully textured and sumptuous even if highly youthful and fruit-forward. Very dry and perfectly clean saline ending. Blanc d’Argile derives from the Biaunes vineyard laying on Kimmeridgian soils, facing west. It is a 100% Chardonnay that has a grip but also vinosity, concentration and ripe fruitiness often in a tropical genre. Saignée de Sorbée is a highly peculiar rosé from the Sorbée vineyard on on Portlandian soils. Made by carbonic maceration and no added sulphur dioxide, this cuvée goes beyond my taste in strong extracted character and funky, oxidative notes. My favourite cuvée in the range then again is Textures, a rare 100% Pinot Blanc from Bertrand’s brother’s vineyard. It is made in the ancient way fermented and aged in buried Georgian amforas with skin contact extended for 10 months. Sounds unlikely that this recipe would ever work, but it does. The long ageing tame some of Pinot Blanc’s varietal flavour whereas one can enjoy the richness and smoothness of its texture. Extrait is a tiny-volume vintaged cuvée that is unusual to the house due to the long time spent on lees. The 2008 is made up of 60% Pinot Noir and 40% Chardonnay, richly yeasty and nutty, strong and notably oxidative wine already upon release.