Today I had my first taste of the upcoming, much anticipated 2012 vintage of Dom Pérignon. This vintage, according to chef de cave Vincent Chaperon, celebrates Dom Pérignon’s freedom of creativity. In a near-perfect year following a truly challenging growing season, Dom Pérignon ended up being equipped with an amazing choice of exciting and versatile building blocks for the cuvée especially on the Pinot Noir front: Aÿ, Verzenay, Bouzy, Hautvillers… Vincent confesses having felt like a kid in a candy store, choosing and opting and stretching the blend… Some other vintages were vinegrowers vintages but with this one he really wore the blender’s hat. “Truthfully it was sheer pleasure to blend it with all of our resources and options from around the region”, he admits. The 2012 was a vintage of both freshness and density. At Dom Pérignon they really played the density card, effortlessly compacting together so much delicious, perfectly ripe fruit. The nose is welcoming, seamless and deeply fruity with Dom Pérignon’s hallmark fragrant smoky layeres. But the elements of surprise catch up with you on the palate. At first the wine feels deceptively light but then comes the fruity power and sheer volume. The wine’s most unique feature is the scintillating or tingling sensation that takes over and energises the rich, round and compact palate. It is almost electrically charged as this nervousness and vibrancy bring such an exciting dynamism on the long, deliciously succulent palate. Dom Pérignon have made it again, they surprised me by playing on their forte of incomparable resources and audacious winemaking. Available on the markets sometime in the autumn, something to look forward to! 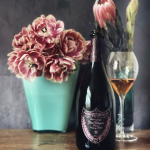 Now that I have the forthcoming release in front of me, I am asking what to expect from a Dom Pérignon Rosé from the super dynamic Richard Geoffroy – Vincent Chaperon duo? To expect the unexpected, I have learned. I love how Vincent calls the next one in line, the 2008, ’untamed, carnal and magnetic’. There is nothing shy to it even if the vintage normally comes across coolly restained. Boldly fruity, boldly Dom Pérignon, there is flesh and richness to support the zingy drive and spicy extravagance. So slow-ageing that we can call it a prelude, the wine shines with its sumptuous pure fruitiness and Pinot power deriving from red wine from Champs de Linotte plot in Hautvillers and Vauzelles in Aÿ. An intriguing melange of delicious sweet cherry fruit, floral tulip whiffs, blood orange and saffron. The palate is firmly structured and tight for the time being, speaking for longevity. Still, there is at the same tiime immediate elegance and charm to it on the lingering, dancing palate. This one is a DP keeper also aaialble from the Autumn onwards.