For this week’s The Finest Bubble Instagram Live tasting Nick proposed a vintage comparison. It was fascinating to compare the excellent harvests 2012 and 2013, which both have a classic, racy character to them and have been left somewhat in the shadow of the much-hyped 2008.

The next exceptional vintage since 2008. A truly difficult growing season saw severe frosts in the winter. March brought warmth but early bud-break made the vines vulnerable to spring frosts. Overall the early growing season was wet and mildew was an issue. Conditions improved dramatically in the later summer months. An August heatwave resulted in a rapid accumulation of sugar but fortunately the nights remained cool, which aided in preserving acidity. Although yields were low (averaging at 9,210 kg/ha) due to frost, hail and disease early in the season, the 2012 harvest was exemplary in its maturity, acidity and grape health. A rare high acid, high sugar September harvest with impeccable concentration of flavour and refreshing vibrancy. Pinot Noir is the superstar of the vintage and Meunier excelled too. This vintage that promises great longevity for its finest cuvées, was widely declared.

This year the growth cycle was late with the vines flowering as late as July in some places due to the long winter and cool spring. Hailstorms caused some damage but overall the summer was hot and dry. The weather turned wet towards mid-September causing outbreaks of rot. The harvest was long and started on September 24th. However, most of the picking of the abundant yield (12,0008 kg/ha) took place in cool conditions in October thus contributing to a classic cool and linear style of Champagnes. Taken into consideration the challenging season, the wines have positively surprised with their pure fruitiness, racy palates and stylish restraint. There is heterogeneity in the results but the best belong to the Champagne elite. This vintage is greatly underrated and but will probably get better appreciated when the region’s most iconic wines will be released, and over time.

We kicked off the tasting with the duo from Taittinger. 2012 came with an instant wow nose: stunning toastiness pushing through below the fragrant ripe apple, lime and yellow plum fruit. Soft, cushiony mousse and persistent length finishing off with fine touch of minerality and appetising sweetness. Such a charmer today. (93 points with potential for 94)

The 2013 was much more reserved. Lemon, pear drops, honey but mostly still smoky and mineral tones. On the light-weight and elegant palate there is silky texture and appetising tension to it. Lean, crisp and long with lots of promise but still not communicating all it has got (91 points with potential for 94). Today the winner is 2012 but I see equal potential in them, but it’ll take 2013 more time time to reach it! 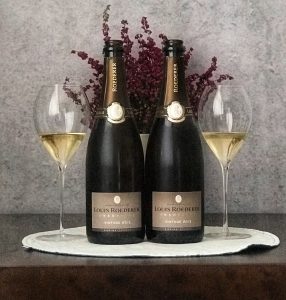 The tasting’s second pair came from maison Louis Roederer. The 2012 Vintage offers layered complexity of subdued toastiness over bright, fragrant fruitness. The distinct chalky notes arise over time in the glass. Light-weight yet intense, ripe fruity profile with even a touch of tropical fruit alongside yellow apple, lemon drops, and pear fruit. Beautifully racy acidity on the linear but voluminous, driven palate. Expressive of lush Pinot fruit with both power and finesse (93 points with potential for 94).

But here the 2013 reached even greater heights with its stunningly pure nose of cool, restrained fruitiness. Highly refined toastiness mingles with the juicy yuzy and floral tones. The fruit is just as crisp and crunchy on the palate as it was on the nose. Feels light but there is plenty of focused intensity to it. Mouthwatering acidity with succulent and energetic feel to the palate but the soft, creamy mousse balances the raciness beautifully. Outstanding 2013 from Louis Roederer (94 points with potential for 95).

And, finally came the duo from Pol Roger. In the Vintage 2012 there is great red fruit depth to the elegant, still somewhat withdrawn nose of golden delicious apples, yellow plums, vanilla, wine gums, chalk and soft spiciness. There is a lot happening on the rich, even fatty palate. Generosity and friendliness are at the core here. The palate is very much balanced and promising for more complexity to come. A very correct and textural wine with deliciousness (92 points with potential for 94).

The 2013’s pronounced nose is still reserved and primary but comes with delicious Pinot Noir fruit. Cranberries, wild straberries, marshmallow and red apple. Fine intensity and mouthwatering succulence to the palate. Very young still, but all pieces at place waiting for further expression. Richly flavoured, perfctly clean and long with a sweet, fruity finish (90 points with potential for 93). 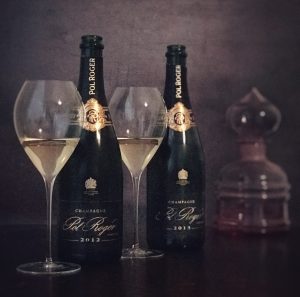 Two very strong vintages and for final assessment we need to wait for the harvest years’ most iconic wines to come out. Stylistically the 2013 sits between the intense yet fresh 2012 and the elegant and acidity-driven 2008. Its wines will surely take longer to come around than the already overt and charming 2012’s.